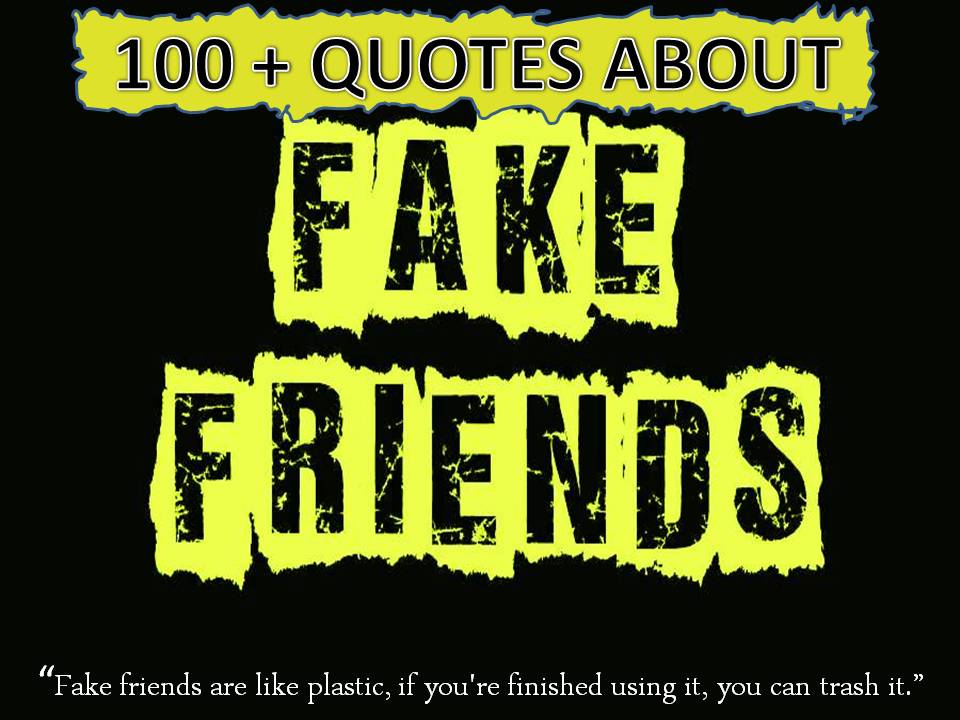 “A fake friend can cause much more damage to you than a real enemy!” ~ Senora Roy

“A fake friend is an enemy in disguise.” ~ Ellen J. Barrier

“A false friend and a shadow attend only while the sun shines.” ~ Benjamin Franklin

“A friend who stands with you in pressure is more valuable than a hundred ones who stand with you in pleasure.” ~ Edward G. Bulwer-Lytton

“A friendship that can cease has never been real.” ~ St. Jerome

“Adverse circumstances and problems help us to find out the real friends and fake friends in life.” ~ Anurag Prakash Ray

“Always be careful of your friend who loves your enemy; you either trust such a fellow for your life or for your death!” ~ Ernest Agyemang Yeboah

“Always sleep with one eye open. Never take anything for granted. Your best friends might just be your enemies.” ~ Sara Shepard

“An honest enemy is better than a best friend who lies.” ~ Tanko

“An honest enemy is better than a false friend. When in doubt, pay more attention to what people do and less to what they say. Actions not only speak louder than words, they are more difficult to fake.” ~ Zero Dean

“Associate yourself with people of good quality, for it is better to be alone than in bad company.” ~ Booker T.Washington

“Be careful who you trust because as quickly as they say they’re your friend is how quick they can turn their backs on you.” ~ Abhishek Tiwari

“Be very careful of who you share your problem with, remember that not every friend that smile at you is your best friend.” ~ Kemmy Nola

“Before you count your friends, make sure you can count on them. Some friends are only around when they want something from you but are never there when you need something from them.” ~ Rashida Rowe

“Being too nice is a crime today. Fake friends are everywhere around you. They will use you and when you are of no use, throw you away like a wrapper.” ~ Shizra

“Best friends have 11 letters, but so does Backstabber.” ~ Wiz Khalifa

“Betray a friend, and you’ll often find you have ruined yourself.” ~ Aesop

“Better an honest enemy than a false friend.” ~ German Proverb

“Beware of enemies who come disguised as friends, if a person hates you they won’t want to see you succeeding at anything and they will try to discourage you whenever they get the chance.” ~ Rashida Rowe

“Beware the FRENEMY; enemy disguised as friend who pretends to look after your interests but really loves it when things turn sour for you.” ~ Mufti Ismail Menk

“Don’t be sad or afraid when you start losing friends; be glad you’re getting rid of the fake ones. Stay true to yourself.” ~ Terry Mark

“Every coin has two sides, just like most people have two faces.” ~ Rashida Rowe

“Fake friend: someone who forgets you once they have someone new.” ~ Nishan Panwar

“Fake friends are like a bad tooth ache, annoying and eventually you get rid them.”          ~ Ginger Smith

“Fake friends are like plastic, if you’re finished using it, you can trash it.” ~ Unknown

“Fake friends are with you today and against you tomorrow. Whatever they say defines them not you.” ~ Shizra

“Fake friends get mad when we don’t pretend to like them.” ~ Carlos Wallace

“Fake friends: once they stop talking to you, they start talking about you.” ~ Unknown

“Fake friends: those who only drill holes under your boat to get it leaking; those who discredit your ambitions and those who pretend they love you, but behind their backs they know they are in to destroy your legacies.” ~ Israelmore Ayivor

“False friendship, like the ivy, decays and ruins the walls it embraces, but true friendship gives new life and animation to the object it supports.” ~ Richard Burton

“Flee from fake friends. There is nothing called half-truth. Whatever looks like a lie is a lie!” ~ Israelmore Ayivor

“Friends behave in the same way as a tree does. The root, of a tree is your real friends. The fake ones will gradually fall off like leafs.” ~ Shane Atkinson

“Haters will be all in your face wishing you good luck but behind your back praying to God you fall off.” ~ Gee Linder

“He, who laughs at your struggles, will be the first to bow before you when success finds you. Just keep going.” ~ Tshepo Koos Maluleke

“I hate fake people. You know what I’m talking about. Mannequins.” ~ Jarod Kintz

“I used to think enemies were the worst people in the world, but that was until I met fake friends and realized that they’re a lot worse.” ~ Ritu Ghatourey

“I’d rather have an enemy who slaps me in the face than a friend who stabs me in the back.” ~ Nishan Singh

“If you want to find out who your real friends are, sink the ship. The first ones to jump aren’t your friends.” ~ Marilyn Manson

“If you’re successful in life, you will win false friends and make true enemies. Succeed anyway, for they will lose in the long run.” ~ William E Lewis Jr.

“In the beginning, some people try to appear that everything about them is in black and white, until later their true colors come out.” ~ Anthony Liccione

“It is hard to deal with someone who smiles and pretends to like you to your face and sticks that eight inch blade in your back when you turn around.” ~ Nishan Panwar

“It’s funny how sometimes the people you’d take a bullet for, are the ones behind the trigger.” ~ Ritu Ghatourey

“Know who your best friends are and if they can’t be honest with you, then they are not worth keeping Let them fade out of your life.” ~ Kemmy Nola

“Lord, watch over my good friends and protect me from the fake ones.” ~ Terry Mark

“Make sure the lions you roll with aren’t snakes in disguise.” ~ Genereux Philip

“Neither a fake friend nor a liar can be trusted, with a secret.” ~ Ellen J. Barrier

“One fake friend can do more harm than five enemies. ~ Anmol Andore

“One night I prayed to God, I asked could he please remove my enemies from my life, and before you knew it I started losing friends. ~ Meek Mill

“Pay attention to the friends that help you when you’re down, so you know who to ignore when you get back up.” ~ Rashida Rowe

“People think being alone makes you LONELY, but I don’t think that is true. Being surrounded by wrong people is the loneliest thing in World.” ~  Unknown

“People wears a mask of a lie so they look attractive, so be careful.” ~ Muhammad Saqib

“Pretend to be poor in reality and you’ll notice a decrease in your friends list and request.” ~ Michael Bassey Johnson

“Sometimes it’s not the person who changes; it’s the mask that falls off.” ~ Mhaj Porras

“The most dangerous among us come dressed as angels and we learn too late they are the devil in disguise.” ~ Carlos Wallace

“The touchstone of false friends is the day of need: by way of proof, ask a loan from your friends.” ~ Saib Tebrizi

“The worst kinds of enemies are those who pretend to be your friends.” ~ Rashida Rowe

“True friends esteem you of greater worth than you feel deserving. False friends demand you prove that worth.” ~ Richelle E. Goodrich

“True friends sometimes quarrel, but will never part. Fake friends will always smile with you but will keep stabbing you at the back.” ~ Terry Mark

“Watch who you call friend because friends are the same ones that will leak your business to everyone after all not friends anymore.” ~ Ritu Ghatourey

“We don’t need to fear the enemy who attacks us, but the fake friends that are with us only in our good times.” ~ Anurag Prakash Ray

“We fear our enemy but the bigger and real fear is that of a fake friend who is sweetest to your face and most vile behind your back.” ~ Mufti Ismail Menk

“We never lose friends, fake ones are exposed.” ~ Carlos Wallace

“What greater wound is there than a false friend?” ~ Sophocles

“What’s the whole point of being pretty on the outside when you’re so ugly on the inside?” ~ Jess C. Scott

“You got nothing to lose. You don’t lose when you lose fake friends.” ~ Joan Jett

“You’ll be surrounded by many so called well wishers during your good times but there’ll be only few one around you in your bad times.” ~ Anurag Prakash Ray

A real friend’s got your back, while the fake ones are sticking knives in it.

A real situation will always expose a fake friend.

Being too nice is almost a crime nowadays.  Fake friends are everywhere.

Better to have an enemy who slaps you in the face than a friend who stabs you in the back.

Cannot trust anyone these days. Fake is becoming the new trend.

Cut off fake people for real reasons, not real people for fake reasons.

Don’t fear the enemy who attacks you. Fear the fake friend who hugs you.

Every coin has two sides, just like most people have two faces.

Fake friends are like leeches, they stick to you till they sucked the blood and life out of you.

False friends are like your shadow; they follow you in the sun, but leave your side when it gets dark.

It’s better to be around strangers than to keep fake friends at least we don’t expect anything from a stranger.

Parent notice your fake friends before you do.

Some of the most poisonous people come disguised as friends and family.

The best way to keep your secrets from your enemies is to stop telling your friends.

The most dangerous creature on this earth is a fake friend.

True friends cry when you leave. Fake friends leave when you cry.

With money you can buy all the friends you want, but they are never worth the price.

Your closest friend may turn out to be your greatest enemy.

If you find this “Quotes About Fake Friends” is helpful and useful for you please share this post to your friends and relatives.

37 Famous Quotes about Power of Silence

40 Memorable Quotes From the book Alchemist