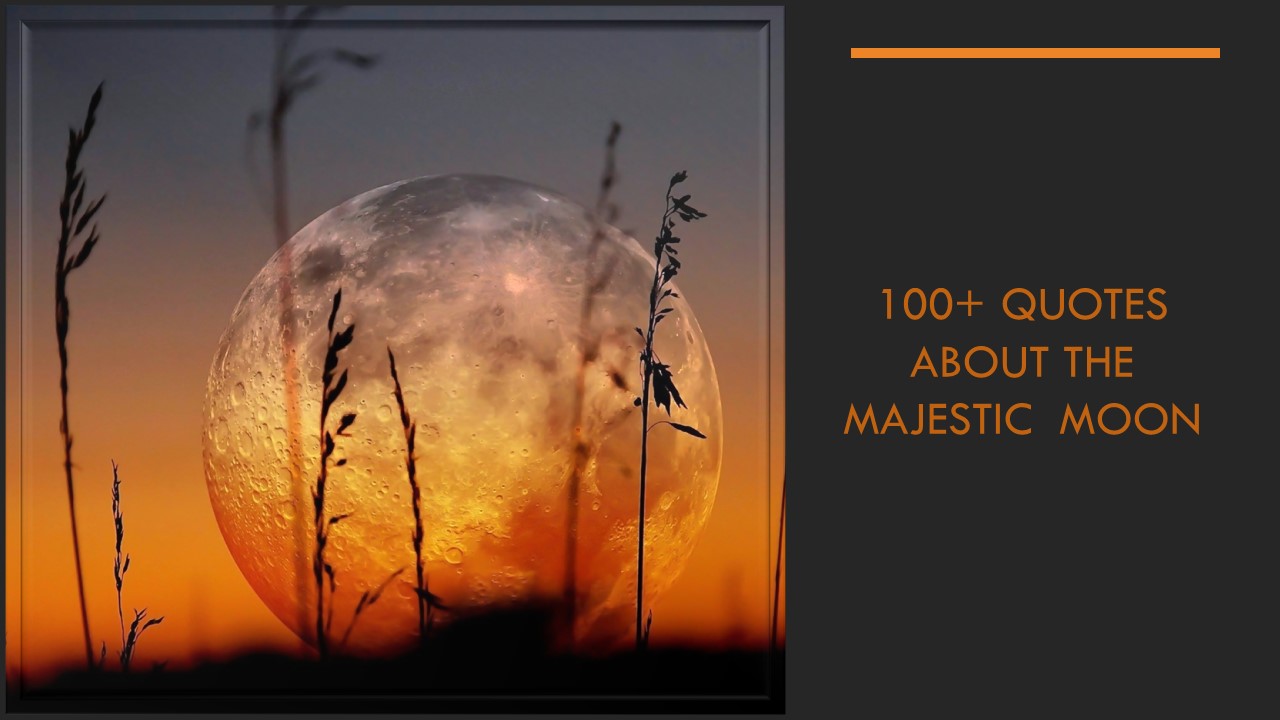 A day spent on the moon is enough to make one believe in God. – Khalid Masood

Always remember we are under the same sky, looking at the same moon. – Maxine Lee

And all the insects ceased in honour of the moon. – Jack Kerouac

And if you’re ever feeling lonely just look at the moon. Someone somewhere is looking right at it too. – Unknown

At night the ragged clouds and wind have only one companion … the moon. – Boncho

At night, the moon, a pregnant woman, walks cautiously over the slippery heavens.           – Richard Aldington

Be both soft and wild. Just like the moon. Or the storm. Or the sea. – Victoria Erickson

But even when the moon looks like it’s waning…it’s actually never changing shape. Don’t ever forget that. – Ai Yazawa

Do not swear by the moon, for she changes constantly. then your love would also change.  – William Shakespeare

Don’t tell me the sky is the limit when there are footprints on the Moon. – Paul Brandt

Don’t worry if you’re making waves just by being yourself. The moon does it all the time.   – Scott Stabile

Drag me to the moon, to catch a star and seize its brilliance as I’m swept up in amorphous dust. – Bradley Chicho

Every time I look at the moon, I feel as if I am falling in love! – Avijeet Das

Everyone is a moon and has a dark side which he never shows to anybody. – Mark Twain

I always look up at the moon and see it as the single most romantic place within the cosmos. – Tom Hanks

I am a cemetery by the moon unblessed. – Charles Baudelaire

I am as ordinary as the grains of sand, but I dream of kissing the stars and dancing with the Moon! – Avijeet Das

I dipped my hands in the moon-blood – Christine Lavant

I feel like the moon is a very beautiful woman. She’s in control. – Ravyn Lenae

I moon bathed diligently, as others sunbathe. – Denise Levertov

If I were the moon, I know where I would fall down. – D. H. Lawrence

If the Moon wants to show its beauty to the world, it must make a deal with the wind to disperse the clouds! – Mehmet Murat ildan

In the flood of her joy, the Moon filled the room like a phosphoric atmosphere, like a luminous poison. – Charles Baudelaire

Is not the beautiful moon, that inspires poets, the same moon which angers the silence of the sea with a terrible roar? – Khalil Gibran

It is a beautiful and delightful sight to behold the body of the Moon. – Galileo Galilei

It is the very error of the moon; she comes nearer earth than she was wont and makes men mad. – William Shakespeare

Look at that moon. Potato weather for sure. – Thornton Wilder

Maybe the wolf is in love with the moon and each month it cries for a love it will never touch. – Unknown

Meditate. Live purely. Be quiet. Do your work with mastery. Like the moon, come out from behind the clouds! Shine. – Buddha

Moonlight is filtered sunshine, perfectly brewed for your nights. – Unknown

Moon! Moon! I am prone before you. Pity me, and drench me in loneliness. – Amy Lowell

Moonlight drowns out all but the brightest stars. – J.R.R. Tolkien

Moonlight is a sculpture; sunlight is painting. – Nathaniel Hawthorne

Never look at someone else’s success to determine yours, because, after the sunset, the moon comes out in its full glory to beautify the night. – Unknown

Perhaps the crescent moon smiles in doubt at being told that it is a fragment awaiting perfection. – Rabindranath Tagore

She and the moon could always be found playing in the darkness. – A.J. Lawless

She was like the moon, half here and half somewhere else. – Meeta Ahluwalia

Shoot for the moon – if you miss you’ll end up in the stars. – Artie Shaw

Smile like the moon to make life beautiful, because in your beautiful smile life finds meaning. – Debasish Mridha MD

So imagine that the lovely moon is playing just for you – everything makes music if you really want it to. – Giles Andreae

The beautiful moon is an antidepressant. Love for her light is in every heart because she is so friendly, loving and forgiving. – Debasish Mridha MD

The black wolf’s curse awakes every time that a full moon points in the middle of the sky.  – Pet Torres

The full moon – the mandala of the sky. – Tom Robins

The moon can never breathe, but it can take our breath away with the beauty of its cold arid orb. – Munia Khan

The moon fascinates us in her simplicity. – Avijeet Das

The moon has become a dancer at this festival of LOVE. – Rumi

The moon in all her immaculate purity hung in the sky, laughing at this world of dust. She congratulated me for my carefully considered manoeuvres and invited me to share in her eternal solitude. – Shan Sa

The moon is at her full, and riding high, Floods the calm fields with light. The airs that hover in the summer sky Are all asleep tonight. – William C. Bryant

The moon is fat and the night air is so pure it seems edible. – Roberto Bolano

The moon is made of green cheese. –John Heywood

The moon is the queen of everything. She rules the oceans, rivers, rain. When I am asked whose tears these are; I always blame the moon. – Lucille Clifton

The Moon is the first milestone on the road to the stars. – Arthur C. Clarke

The moon is the reflection of your heart and moonlight is the twinkle of your love.              – Debasish Mridha

The moon puts on an elegant show, different every time in shape, colour and nuance.        – Arthur Smith

The moon rested right above the mountains, a place I call home. – Daniel Wallock

The moon was a ghostly galleon tossed upon cloudy seas. – Alfred Noyes

The moon was a white-grey disc sailing in the cloudless sea; streams of moonlight sank into the island bleeding silver. – Unknown

The moon was reigning over their world, glowing its full splendour to all those willing to look up. – Irina Serban

The moon will guide you through the night with her brightness, but she will always dwell in the darkness, in order to be seen. – Shannon L. Alder

The moon witnesses the scenes of true love, but discloses them not. – Yemon

The moon, like a flower In heaven’s high bower, With silent delight Sits and smiles on the night. – William Blake

The moonlight builds its cold chapel again out of piecemeal darkness. – Jane Hirshfield

The moving moon went up the sky And nowhere did abide: Softly she was going up, And a star or two beside. – Samuel Taylor Coleridge

The night walked down the sky with the moon in her hand. – Frederic Lawrence

The sun does not abandon the moon to darkness. – Brian A. McBride

The sun is within me, and so is the moon. – Kabir

The sun loves the moon so much that he dies every night to let her breathe, and in return, she reflects his love. – Jeffrey Fry

There are nights when the wolves are silent and only the moon howls. – George Carlin

There is something haunting in the light of the moon. – Joseph Conrad

There’s electricity on the moon.  A pulse, magic energy, a bewitching entrancement unlike that of the sun. – Unknown

There’s no point in saving the world if it means losing the moon. – Tom Robbin

Three things cannot be long hidden: the sun, the moon, and the truth. – Buddha

Tonight the moon is playing peek-a-boo, weaving in and out of ribbons of black clouds scudding across the sky. – Debi Gliori

We are all like the bright moon; we still have our darker side. – Khalil Gibran

When we are looking at the moon, we see the purest reflection of our own beauty and magic, which is why we love the moon so much. – Debasish Mridha MD

With freedom, books, flowers, and the moon who could not be happy? – Oscar Wilde

You are the root of heaven, the morning star, the bright moon, the house of endless Love. –  Rumi

If you enjoyed this post of “Quotes About The Majestic Moon”, please share it with your friends.