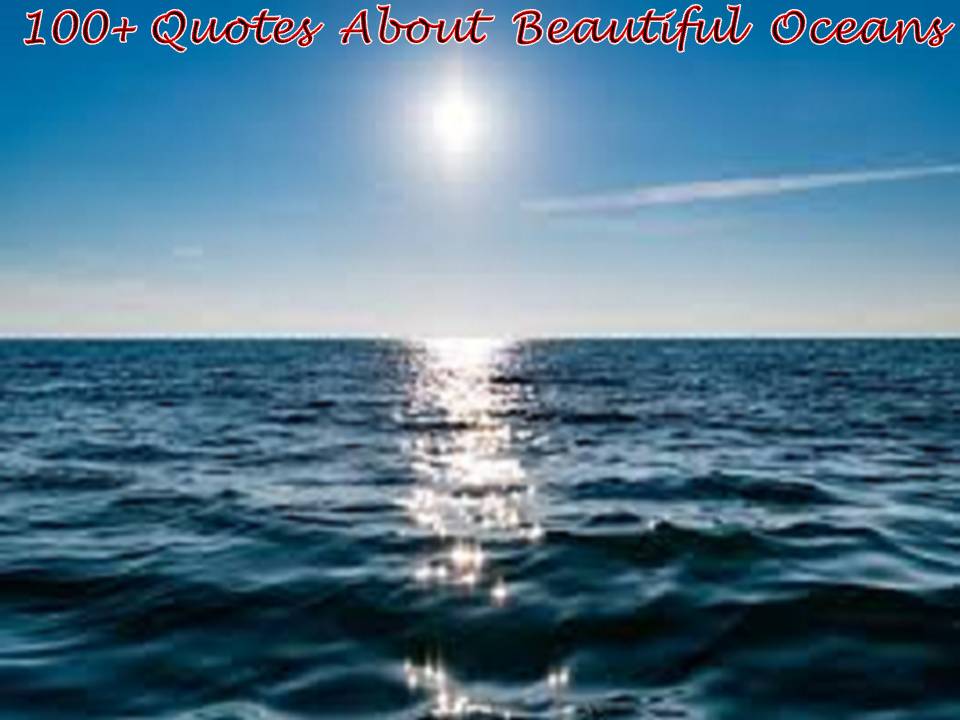 A pool just isn’t the same as the ocean. It has no energy. No life. – Linda Gerber

A river starts by longing for the ocean. – Will Advise

An ocean breeze puts a mind at ease. – Unknown

And there’s nothing more beautiful than the way the ocean refuses to stop kissing the shoreline, no matter how many times it’s sent away. – Sarah Kay

At night, when the sky is full of stars and the sea is still you get the wonderful sensation that you are floating in space. – Natalie Wood

At sea, I learned how little a person needs, not how much. – Robin Lee Graham

At the beach, life is different. Time doesn’t move hour to hour but mood to moment. We live by the currents, plan by the tides, and follow the sun. – Sandy Gringas

Be alone with the sea for it is there you will find answers to questions you didn’t realize exist. – Khang Kijarro Nguyen

Dance with the waves, move with the sea, let the rhythm of the water set your soul free.   – Christy Ann Martine

Dear ocean, thank you for making us feel tiny, humbled, inspired, and salty all at once.     – Unknown

Don’t try to describe the ocean if you’ve never seen it. – Jimmy Buffett

Each kiss of an ocean wave is passed along, as long as there is life on and in the seas.        – Anthony T. Hincks

Eternity begins and ends with the ocean’s tides. – Unknown

Every time I slip into the ocean, it’s like going home. – Sylvia Earle

How inappropriate to call this planet Earth when it is clearly Ocean. – Arthur C. Clarke

‎I have always been fascinated by the ocean, to dip a limb beneath its surface and know that I’m touching eternity, that it goes on forever until it begins here again.                       – Lauren DeStefano

I pray to be like the ocean, with soft currents, maybe waves at times. More and more, I want the consistency rather than the highs and the lows. – Drew Barrymore

I threw bitter tears at the ocean, but all that came back was the tide. – Sarah McLachlan

If you want to hear the distant voice of the ocean put your ear to the lips of a seashell.        – Curtis Tyrone Jones

In every outthrust headland, in every curving beach, in every grain of sand, there is the story of the earth. – Rachel Carson

Isn’t it strange, the way time moves? I could stand here and watch the sea crash beneath me for hours and it would feel like only minutes had passed. – Sjana Elise Earp

It’s a marvellous thing, the ocean. You never get tired of watching it. And no matter how rough the waves get, you’re never bothered by the noise the water makes by the commotion of the surface – it never seems too loud, or too wild. – Banana Yoshimoto

It’s hard for me to put into words why I like the beach so much. Everything about it is renewing for me, almost like therapy… Beach Therapy. – Amy Dykens

It’s the sound of the sea that makes you believe in mermaids. – Anthony T.Hincks

Let the waves carry you where the light cannot. –  Mohit Kaushik

Life takes you down many paths but my favourite ones lead to the beach. – Unknown

Limitless and immortal, the waters are the beginning and end of all things on earth.           – Heinrich Zimmer

Looking out over the ocean you can see reflections of God. –  Catherine Pulsifer

Mind on a permanent vacation, the ocean is my only medication, wishing my condition isn’t ever going to go away. – Jimmy Buffett

My sense of direction leads me one way: to the beach. – Unknown

My soul is full of longing for the secret of the sea. And the heart of the great ocean sends a thrilling pulse through me. – Henry Wadsworth Longfellow

Nothing is more beautiful than how the ocean continues to come back and caress the sand, despite how many times it is pushed away. – Unknown

Nothing soothes the soul like a walk on the beach. –  Unknown

On the beach, you can live in bliss. – Dennis Wilson

Our memories of the ocean will linger on, long after our footprints in the sand are gone.      – Unknown

Standstill, and dream because life is worth living at the beach! – Unknown

Summer is calling me with the music of an ocean breeze. I must go dance with the waves of love. – Debasish Mridha

That the sea is one of the most beautiful and magnificent sights in Nature, all admit.          – John Joly

The beauty and mystery of the ocean fills our lives with wonders, vast beyond our imagination. – M.L.Borges

The breaking of a wave cannot explain the whole sea. – Vladimir Nabokov

The calming movement of the sea along with the restless ocean breeze gently caresses me creating a soothing trance which lulls me to a place of peace. – M. L. Borges

The cure for anything is saltwater – sweat, tears, or the sea. – Isak Dinesen

The ocean has a life of its own. Its tides, whirlpools, currents and eddies are a testament to its conflicting emotions. – Anthony T. Hincks

The ocean has always been a salve to my soul. – Jimmy Buffett

The ocean is a central image. It is the symbolism of a great journey. –  Enya

The ocean is a mighty harmonist. – William Wordsworth

The ocean is a wilderness reaching round the globe, wilder than a Bengal jungle, and fuller of monsters, washing the very wharves of our cities and the gardens of our sea-side residences. – Henry David Thoreau

The ocean is both my mistress and my lover. How else can I explain her salty kiss that is still on my lips? – Anthony T.Hincks

The ocean is everything I want to be. Beautiful, mysterious, wild and free.  – Unknown

The ocean is more ancient than the mountains and freighted with the memories and the dreams of Time. – H. P. Lovecraft

The ocean is not a big lake; the lake is not a small ocean! The ocean is an ocean, lake is a lake! – Mehmet Murat ildan

The ocean is this beautiful, unexplored place. Why on Earth everyone isn’t down there, I don’t know. – Graham Hawkes

The ocean makes me feel really small and it makes me put my whole life into perspective… it humbles you. – Beyoncé Knowles

The ocean stirs the heart, inspires the imagination and brings eternal joy to the soul.          – Wyland

The ocean was magical to her, its depths and mysteries were boundless, its call irresistible. – Jeff Mariotte

The ocean’s currents are a turbulent emotion which man has yet to come to terms with.      – Anthony T.Hincks

The pleased sea on a white-breasted shore… A shore that wears on her alluring brows rare shells, far brought, the love-gifts of the sea, That blushed a tell-tale. – Alexander Smith

The sea appears all golden. Beneath the sun-lit sky. – Heinrich Heine

The sea complains upon a thousand shores. – Alexander Smith

The sea is a desert of waves,  A wilderness of water. – Langston Hughes

The sea is a field full of miracles where it shows nature’s resilience against destruction.       – The Grumpy Guru

The sea is emotion incarnate. It loves, hates, and weeps. It defies all attempts to capture it with words and rejects all shackles. No matter what you say about it, there is always that which you can’t. – Christopher Paolini

The sea is everything. It covers seven-tenths of the terrestrial globe. Its breath is pure and healthy. It is an immense desert, where man is never lonely, for he feels life stirring on all sides. – Jules Verne

The sea is the only embodiment of supernatural and wonderful existence. – Jules Verne

The sea knows no limits, makes no concessions. It has given us everything and it can take everything away from us. – John Ajvide Lindqvist

The sea pronounces something, over and over, in a hoarse whisper; I cannot quite make it out. – Annie Dillard

The sea! the sea! the open sea! The blue, the fresh, the ever free! – Bryan W. Procter

The sea, once it casts its spell, holds one in its net of wonder forever. – Jacques Cousteau

The serenity of the sea is only matched by her salty kiss. – Anthony T.Hincks

The three great elemental sounds in nature are the sound of rain, the sound of wind in a primaeval wood, and the sound of outer ocean on a beach. – Henry Beston

The voice of the sea speaks to the soul. The touch of the sea is sensuous, enfolding the body in its soft, close embrace. – Kate Chopin

The water was a bright, French blue this morning and the surface echoed the clouds in the sky in the reflection. – Sharon Brubaker

The waves of the sea help me get back to me. – Jill Davis

There was a magic about the sea.  People were drawn to it.  People wanted to love by it, swim in it, play in it, look at it. – Cecelia Ahern

There’s nothing more beautiful than the way the ocean refuses to stop kissing the shoreline, no matter how many times it’s sent away. – Sarah Kay

There’s too much we don’t know about the ocean to make me feel comfortable around it.    – Tom Holland

Those who live by the sea can hardly form a single thought of which the sea would not be part. – Hermann Broch

To escape and sit quietly on the beach – that’s my idea of paradise. – Emilia Wickstead

To me the sea is a continual miracle; The fishes that swim, the rocks, the motion of the waves, the ships with men in them. What stranger miracles are there? – Walt Whitman

Treasures of the sea can be found at the beach. Let go and discover!  – Catherine Pulsifer

Waves are not measured in feet or inches, they are measured in increments of fear.          – Buzzy Trent

Waves are the voices of tides. Tides are life. They bring new food for shore creatures and take ships out to sea. They are the ocean’s pulse and our own heartbeat. – Tamora Pierce

Waves tossed themselves against the shore, dragging grit and sand between their nails as they were slowly pulled back out to sea.- Holly Black

We are all connected to the ocean. Without healthy oceans, no life, not even on land, can exist. – Jean-Michel Cousteau

We are tied to the ocean. And when we go back to the sea, whether it is to sail or to watch – we are going back from whence we came. – John F. Kennedy

When a man comes to like a sea life, he is not fit to live on land. – Dr Samuel Johnson

When I forget how talented God is, I look to the sea. – Whoopi Goldberg

Whilst breezy waves toss up their silvery spray. – Thomas Hood

Why do we love the sea? It is because it has some potent power to make us think things we like to think. – Robert Henri

Wild waves rise and fall when they arrive and that’s what makes the calm sea alive.            – Munia Khan

You will love the ocean. It makes you feel small, but not in a bad way. Small because you realize you’re part of something bigger. – Lauren Myracle

Be Patient…
Be Like Snow…
I am thankful…
150 Unique Quotes on Life
Stars cannot shine without darkness
40 Happy New Year Wishes For Facebook/WhatsApp/Twi...

50 Best Quotes Ever on Life and Love