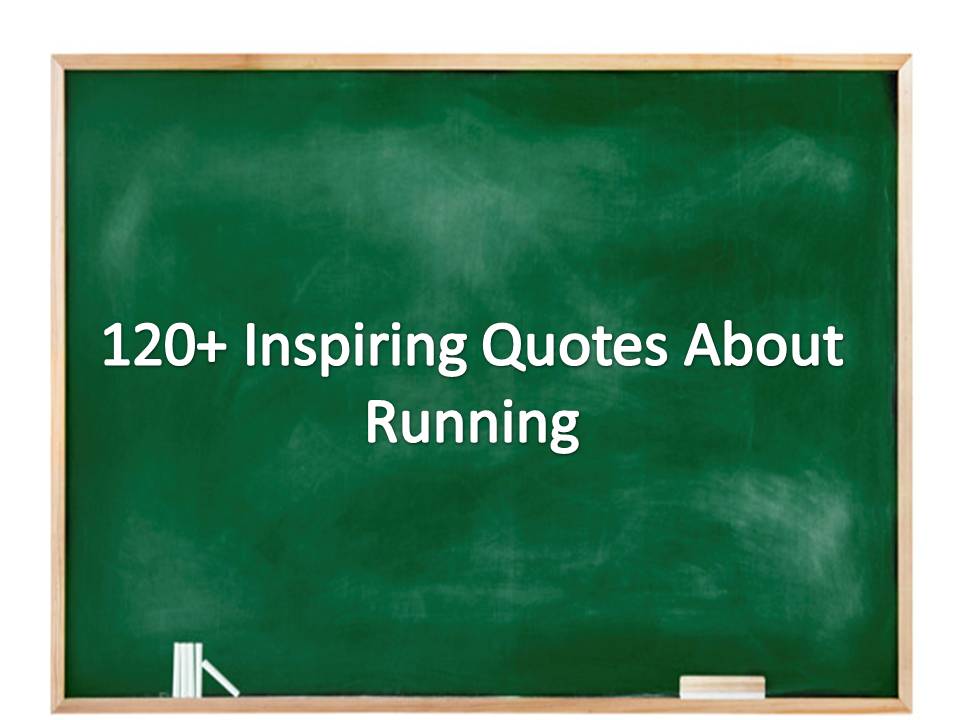 QUOTES ABOUT RUNNING AND RACING

A race is a work of art that people can look at and be affected in as many ways they’re capable of understanding. – Steve Prefontaine

Act like a horse. Be dumb. Just run. – Jumbo Elliot

Anyone can run 20 miles. It’s the next six that count. – Barry Magee

For me, races are the celebration of my training. – Dan Browne

For me, running is a lifestyle and an art. I’m more interested in the magic of it than the mechanics. – Lorraine Moller

I always loved running… It was something you could do by yourself and under your own power. – Jesse Owens

If one could run without getting tired I don’t think one would often want to do anything else. – C. S. Lewis

If you want to become the best runner you can be, start now. Don’t spend the rest of your life wondering if you can do it. – Priscilla Welch

If you want to win a race you have to go a little berserk. – Bill Rodgers

It is true that speed kills.  In distance running, it kills anyone who does not have it.           – Brooks Johnson

It was being a runner that mattered, not how fast or how far I could run. The joy was in the act of running and in the journey, not in the destination. – John Bingham

Long distance running is 90 per cent mental and the other half is physical. – Rich Davis

My whole feeling in terms of racing is that you have to be very bold. You sometimes have to be aggressive and gamble. – Bill Rodgers

Racing is the fun part; it’s the reward of all the hard work. – Kara Goucher

Running is a thing worth doing not because of the future rewards it bestows, but because of how it feeds our bodies and minds and souls in the present. – Kevin Nelson

Running is in my blood-the adrenaline flows before the races, the love/hate of butterflies in your stomach. – Marcus O’Sullivan

Running is my private time, my therapy, my religion. – Gail W. Kislevitz

Running is the classical road to self-consciousness, self-awareness, and self-reliance.           – Noel Carroll

Running taught me valuable lessons. In cross-country competition, training counted more than intrinsic ability, and I could compensate for a lack of natural aptitude with diligence and discipline. I applied this in everything I did. – Nelson Mandela

Someone who is busier than you is running right now. – Nike

The real purpose of running isn’t to win a race. It’s to test the limits of the human heart.    – Bill Bowerman

The will to win means nothing without the will to prepare. – Juma Ikangaa

There are as many reasons for running as there are days in a year… But mostly I run because I am an animal and a child. – George A. Sheehan

There is an itch in runners. – Arnold Hano

To be a good runner, you must first be a good athlete. – Jay Johnson

We may train or peak for a certain race, but running is a lifetime sport. – Alberto Salazar

We run to undo the damage we’ve done to body and spirit. We run to find some part of ourselves yet undiscovered. – John Bingham

We run, not because we think it is doing us good, but because we enjoy it and cannot help ourselves. – Roger Bannister

When the gunshots, you got to go. – Ato Boldon

When you put yourself on the line in a race and expose yourself to the unknown, you learn things about yourself that are very exciting. – Doris Brown Heritage

Why race? The need to be tested, perhaps; the need to take risks; and the chance to be number one. – George Sheehan

You cannot propel yourself forward by patting yourself on the back. – Steve Prefontaine

You didn’t beat me. You merely finished in front of me. – Hal Higdon

After all, if you run far enough, no one can catch you. – V.E. Schwab

As every runner knows, running is about more than just putting one foot in front of the other; it is about our lifestyle and who we are. – Joan Benoit Samuelson

Be more dedicated to making solid achievements than in running after swift but synthetic happiness. – A. P. J. Abdul Kalam

Bid me run and I will strive with things impossible. – William Shakespeare

Do a little more each day than you think you possibly can. – Lowell Thomas

Even if you’re on the right track, you’ll get run over if you just sit there. – Will Rogers

Everyone is an athlete. The only difference is that some of us are in training, and some are not. – Dr George Sheehan

Exerting yourself to the fullest within your individual limits: that’s the essence of running, and a metaphor for life. – Haruki Murakami

Go as long as you can, and then take another step. – Unknown

Go fast enough to get there, but slow enough to see. – Jimmy

I can’t run more than two miles at a time, but when I am in the car I become a running machine. – Debasish Mridh

If you are losing faith in human nature, go out and watch a marathon. – Kathrine Switzer

If you become restless, speed up. If you become winded, slow down. You climb the mountain in an equilibrium between restlessness and exhaustion. – Robert Pirsig

If you train your mind for running, everything else will be easy. – Amby Burfoot

I’ll be happy if running and I can grow old together. – Haruki Murakami

It’s a treat being a runner, out in the world by yourself with not a soul to make you bad-tempered or tell you what to do. – Alan Sillitoe

It’s very hard to understand in the beginning that the whole idea is not to beat the other runners. Eventually, you learn that the competition is against the little voice inside you that wants to quit. – George Sheehan

Joy lies in the fight, in the attempt, in the suffering involved, not in the victory itself.          – Mahatma Gandhi

Nothing, not even pain, lasts forever. If I can just keep putting one foot in front of the other, I will eventually get to the end. – Kim Cowart

Run a lot of miles, some faster than your race pace, and rest, once in a while. – Michael Joyner, MD

Run in the morning … before your brain figures out what your body is doing! – Unknown

Run like hell and get the agony over with. – Clarence DeMar

Running … led to deep happiness that only comes from doing what you love, what your soul screams at you to do upon waking each day. – S.F. Hick

Running allows me to set my mind free. Nothing seems impossible. Nothing unattainable.    – Kara Goucher

Running is a form of practised stoicism. It means teaching your brain and body to be biochemically comfortable in a state of disrepair. – Matthew Inman

Running is about finding your inner peace, and so is a life well-lived. – Dean Karnazes

Running is one of the best solutions to a clear mind. – Sasha Azevedo

Running is the greatest metaphor for life because you get out of it what you put into it.      – Oprah Winfrey

Some seek the comfort of their therapist’s office, other head to the corner pub and dive into a pint, but I chose running as my therapy. – Dean Karnazes

Somebody may beat me, but they are going to have to bleed to do it. – Steve Prefontaine

Tears streamed down my face as I crossed the finish line. I was a new person, a runner.    – Thomas King

The man who moves a mountain begins by carrying away small stones. – Confucius

The marathon can humble you. – Bill Rodgers

There is magic in misery. Just ask any runner. – Dean Karnazes

There will come a day when I can no longer run. Today is not that day. – Unknown

Those who never run long distance or meditate in their lifetimes miss out on the best free drugs the planet has to offer. – Robert Black

We may train or peak for a certain race, but running is a lifetime sport. – Unknown

When you run in the places you visit, you encounter things you’d never see otherwise.        – Tom Brokaw

RUNNING QUOTES TO KEEP YOU GOING

Be sincere in your thoughts; be pure in your feelings. You will not have to run after happiness. Happiness will run after you. – Sri Chinmoy

Get going… Walk if you have to, but finish the damned race. – Ron Hill

If at first, you don’t succeed … run. – Joey Comeau

Life doesn’t run away from anybody. Life runs at people. – Joe Frazier

Running is nothing more than a series of arguments between the part of your brain that wants to stop and the part that wants to keep going. – Unknown

The pain of running relieves the pain of living. – Jacqueline Simon Gunn

We were born to run; we were born because we run. – Christopher McDougall

What seems hard now will one day be your warm-up. – Unknown

250 Beautiful Captions for Nature Photography
Always Believe…
Train Your Mind…
Some people are like clouds…
150+ Great Quotes On TRUST And LOYALTY To Inspire ...
Wake up with Determination…

17 Best Quotes About Forgiveness on Relationships

30 Short Romantic Quotes For Him

11 Short Quotes About Happiness and Life